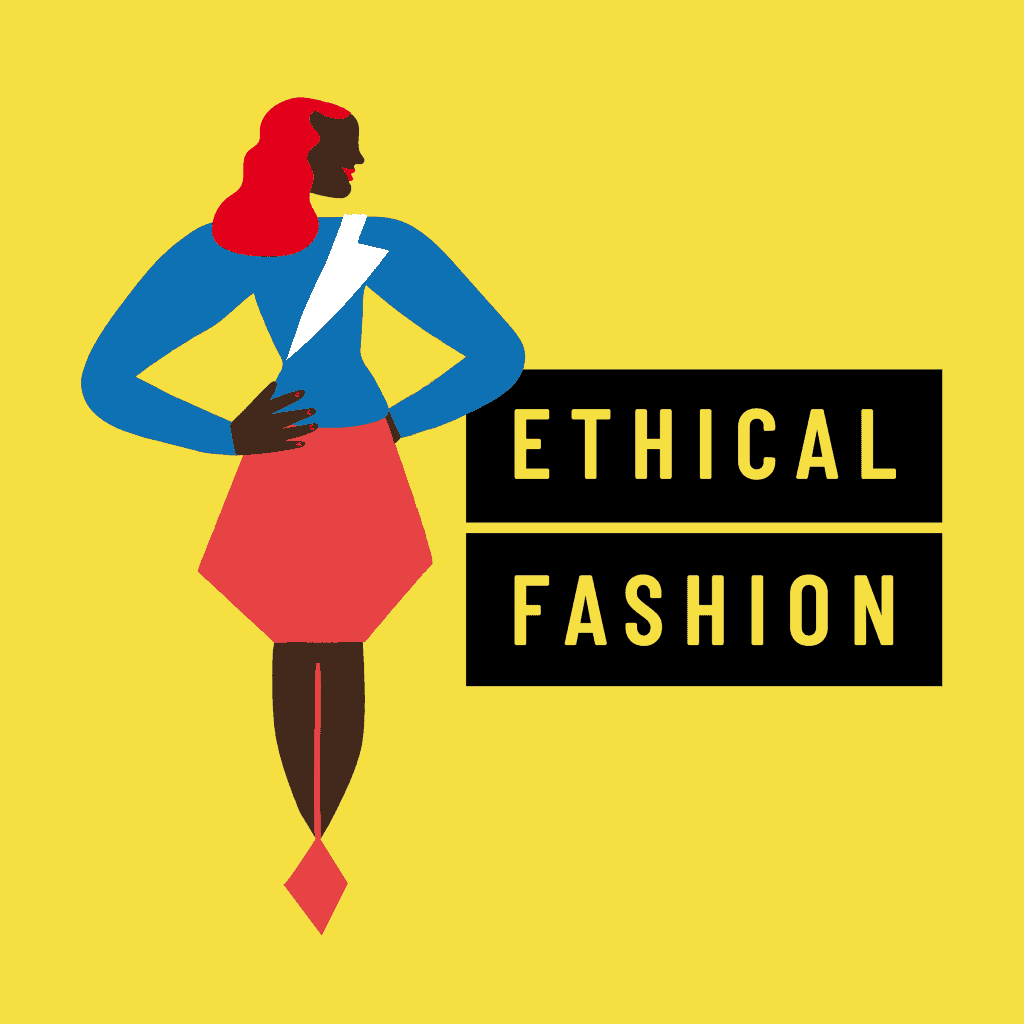 with Clare Press and
Simone Cipriani 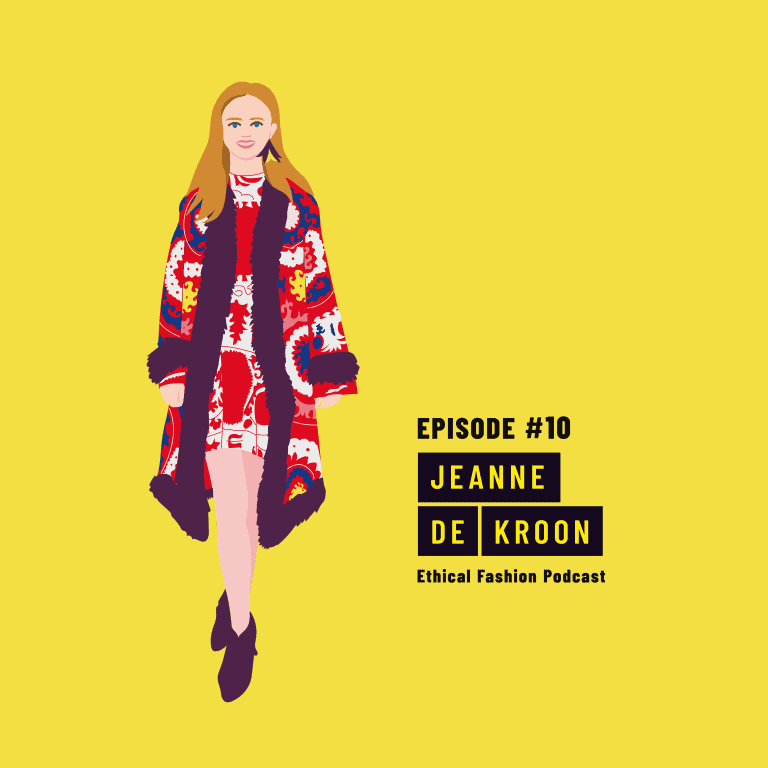 In the final episode of Series 1, Simone and Clare talk with Jeanne De Kroon, the founder of Zazi Vintage – a high-end fashion social enterprise that celebrates upcycled fabrics and artisan techniques. Zazi works with the EFI in Afghanistan.

Jeanne is a free spirit who says her mission is to create: “a narrative that connects and weaves cultures together through cloth, that works with women storytellers all over the world.”

This vibrant conversation is really good fun, but, like fashion, it also engages with serious, complex issues. We discuss the deep questions shaping the sustainability discourse today: who profits and who pays the true cost, transparency, finding purpose, and seeking ways to bridge different cultures. 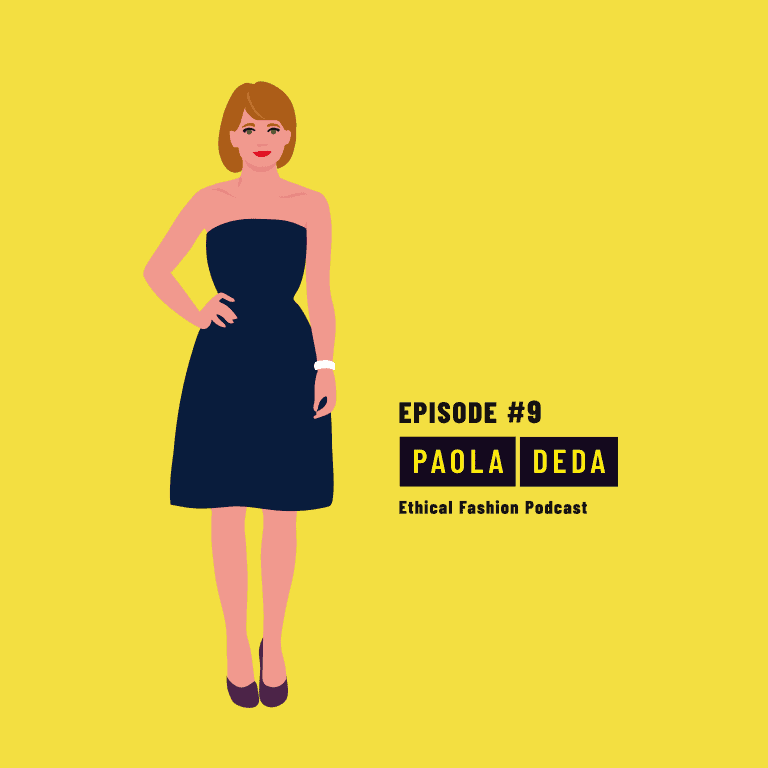 This week, our theme is Social and Environmental Sustainability Standards. Why do we need to talk about this? Standards exist. Indeed, some say there are too many. And yet problems in fashion’s supply chains persist. The fashion industry is well known for it’s labour issues and adverse environmental impacts. Are things improving? What is missing when it comes to compliance, collaboration and consumer input, and how might  increase transparency and accountability?

To fill out the picture and explore the solutions, your hosts Simone Cipriani and Clare Press interview: Paola Deda, who works for the UN Economic Commission for Europe and is active in the UN Alliance for Sustainable Fashion, Jill Dumain, CEO of the company behind the BlueSign certification system and Beatriz Cunha, a specialist in the textiles, clothing, leather, footwear sector at the ILO. 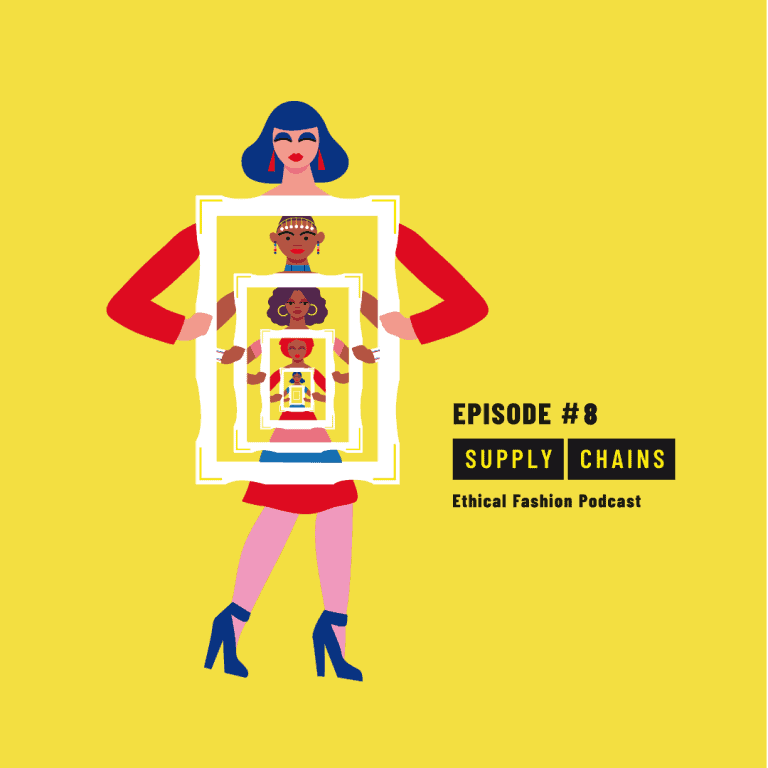 From a lack of transparency to a business model that squeezes those at the bottom, fashion’s supply chains can be a sustainability nightmare. There’s a disconnect between the consumers who buy clothes, the retailers who sell them, the designers who conceive of them and all the different suppliers further down the chain, who cut and sew them, produce the textiles and the raw materials.

And while the fashion industry has been very effective in optimising shareholder wealth, it has been less so when it comes to creating wealth for other stakeholders – in particular suppliers and workers.

The current system favours ‘buy cheap, sell high’, compressing the cost of production. Suppliers find themselves competing on price and are often forced to compromise on employment standards to stay in business.

So what’s the alternative? In this Episode we ask, how can we create positive sum relationships, rather than zero sum transactions in the fashion supply chain? What happens when we start to view suppliers and workers as true stakeholders rather than simple as costs? 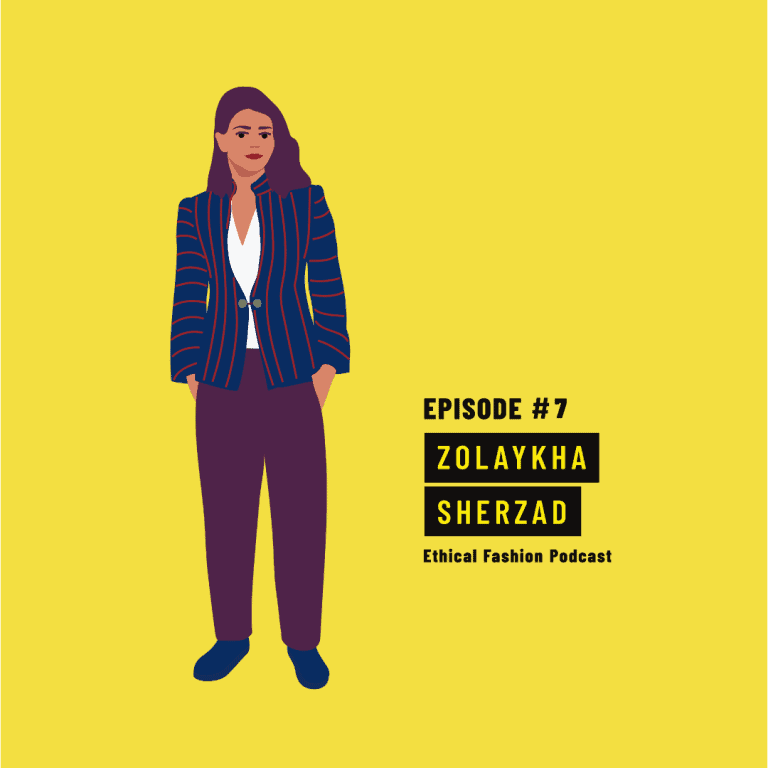 Zolaykha Sherzad - Made in Kabul

Acting as a bridge between fashion brands and artisan producers, the Ethical Fashion Initiative carefully measures the impact of each order, to ensure that the work is positively impacting the lives of the artisans, and that each project works towards the UN Sustainable Development Goals. This is sometimes difficult, always rewarding work – and perhaps nowhere more so than in Afghanistan.

There, the EFI’s main fashion partner is Zarif Design. In this episode, your hosts Simone Cipriani and Clare Press sit down with Zarif’s inspiring founder, Zolaykha Sherzad to hear how she established her social enterprise to bring beauty, harmony and hope to one corner of the city she grew up in. 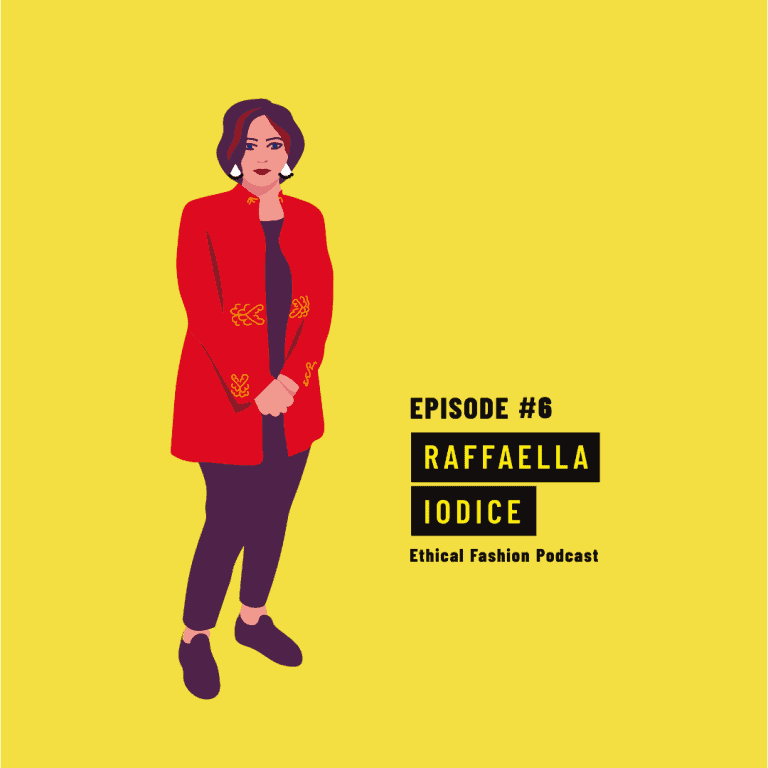 Making a difference with Raffaella Iodice

You’ve probably heard Simone say, “It’s a very serious business, fashion.” Done right, the business of fashion can provide pathways for fair work and hope in places where they’ve been lacking. But how do our institutions put this into practice in areas afflicted by conflict and humanitarian disaster?

In this Episode, Clare talks the European Commission’s Raffaella Iodice to find out how it all works, and learn how the Ethical Fashion Initiative began its projects in Afghanistan. And to discover Raffaella’s personal story too – this is a conversation about finding purpose and following your dreams. 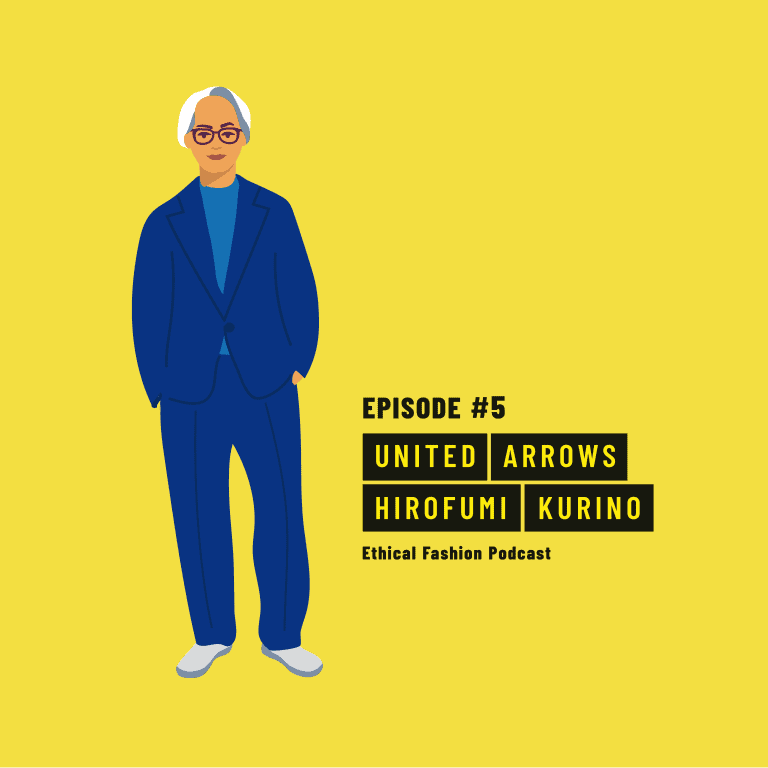 Come with us to Tokyo Fashion Week, where your hosts Simone Cipriani and Clare Press met with longtime friend of the Ethical Fashion Initiative, Hirofumi Kurino of United Arrows.

According to Business of Fashion, he’s a “leading arbiter or style”. Polimoda calls him “a fashion oracle” and Vogue, one of the most stylish men in fashion. Mr. Kurino also has a fine understanding of the importance of socially responsible business. United Arrows was the first Japanese retailer to work with the EFI, back in 2013.

A fascinating look at Japanese style, what makes successful retail and the importance of sustainability. Plus you’ll hear all about how Mr Kurino launched a United Arrows sub-brand, Tégê, with accessories made in Kenya and men’s tailoring sewn in Japan using artisan produced fabric from Burkina Faso. It’s all about the mix, he says. After all, Kurino-san is also a DJ. 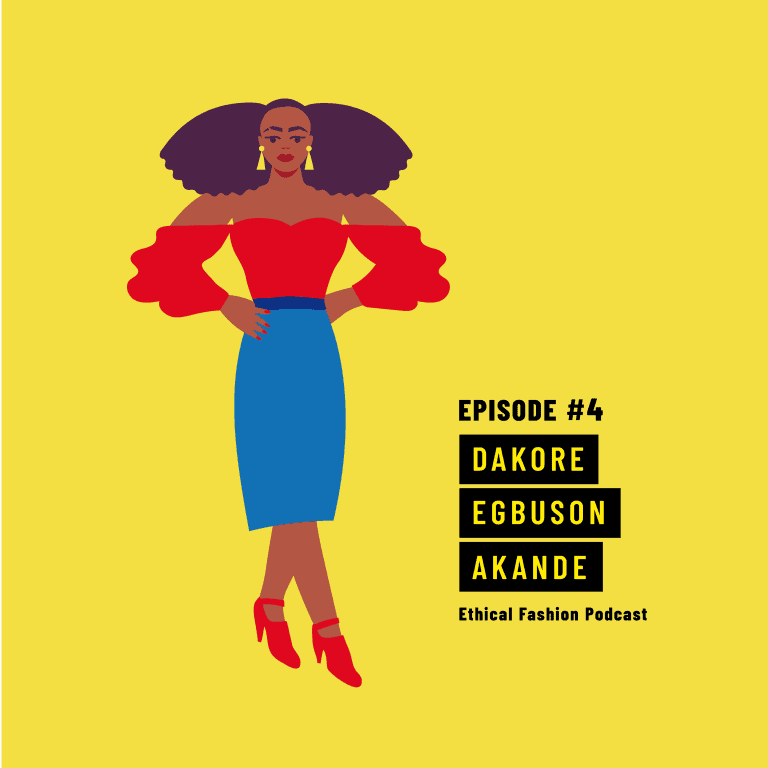 The Ethical Fashion Initiative Accelerator is programme for African designers supports young fashion talent to become investment ready, expand their supply chains, scale up their production, and build their fashion businesses. In this episode, your hosts Simone Cipriani and Clare Press catch up with one of the mentors, Nigerian actor Dakore Egbuson Akande.

Dakore is Nollywood royalty. She has appeared in more than 50 films, including the romantic comedy Isoken, for which she won an African Academy Movie Award for Best Actress in 2018. She started out a TV presenter, she also sings and today does important humanitarian work.

This conversation explores the power of creativity and the opportunities for economic advancement as well as cultural celebration and exchange, provided by the arts. 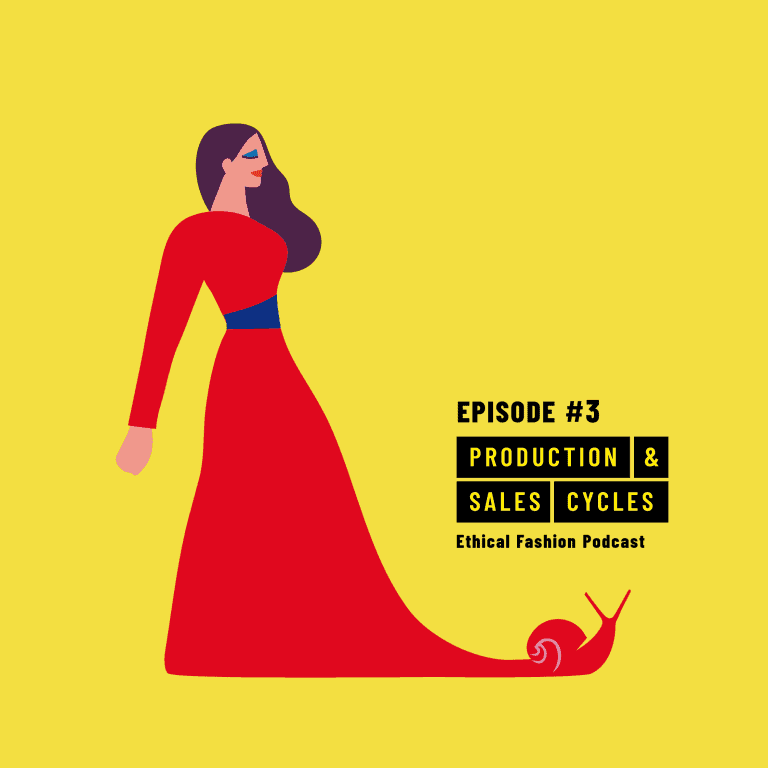 Fashion’s discount culture, sped-up sales cycles and overproduction are out of control – and COVID19 is adding extra pressure.

Will the industry take this chance to rethink, or hurtle along even faster in the race to the bottom? How might we consciously slow down and consider all stakeholders to rebuild value in fashion made to love and last?

In this Episode, your hosts Clare Press and Simone Cipriani talk to Sarah Rovis, CEO of the Australian accessories brand Mimco; Robin MacAndrew who heads up the social enterprise Artisan Fashion in Kenya; and Dexter Peart, who with his twin brother Byron Peart, runs the consciously sourced fashion and homewares platform Goodee.

Our music is from the original production From Kabul to Bamako, music directed by Saïd Assadi. 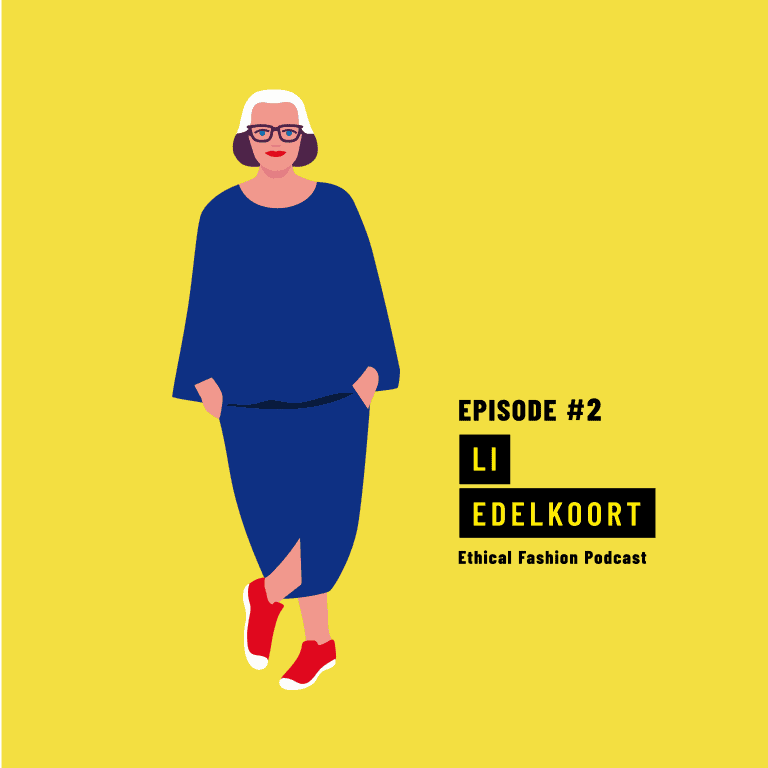 In this episode, Simone and Clare are in Paris to talk with the great Dutch trend forecaster Lidewij Edelkoort and hear her insights on where fashion – and culture – is headed.

“We will change possibly everything we do now. It’s going to be a radical moment of change,” says Li, who once described her work as “archeology of the future”.

Li’s company Trend Union puts out riveting forecasts and reports predicting what’s next. You’ve no doubt heard of her famous Anti-Fashion Manifesto published in 2014. And you probably read recently about her ideas on how coronavirus has led us into a quarantine of consumption from which we might, if we’re smart, choose to press reset button. This interview recorded before that, but it is, unsurprisingly prescient.

From slowing down and doing more with less to new economic models. From reconnecting with storytelling to the tactility of textiles and the importance of local communities – all these things are on tomorrow’s agenda. 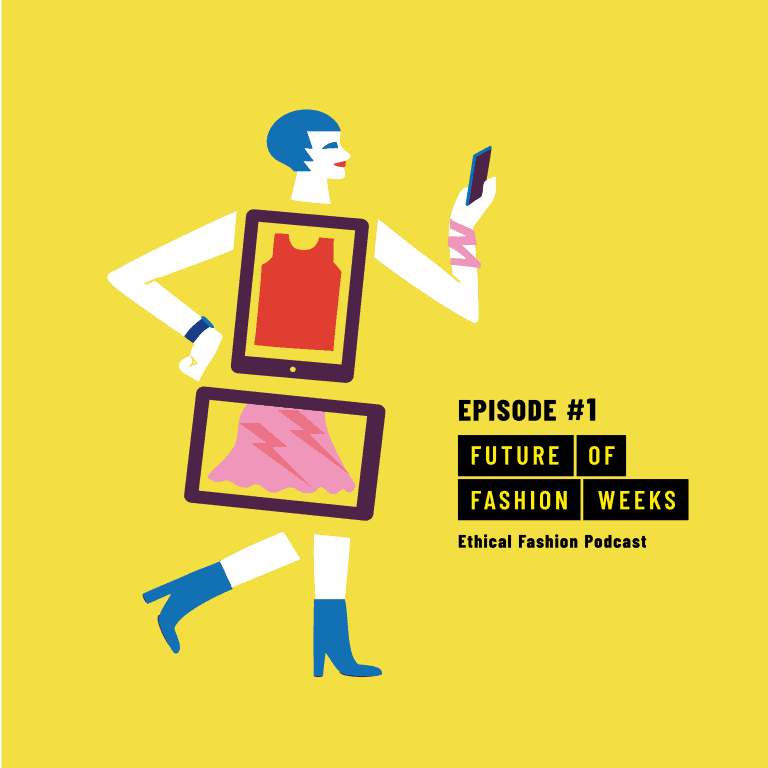 Welcome to the very first episode of the ETHICAL FASHION PODCAST! In this episode, your hosts Simone Cipriani and Clare Press speak to International Vogue Editor Suzy Menkes; Roberta Annan, founder of the African Fashion Foundation; writer and sustainability consultant Rachel Arthur; and Helsinki Fashion Week's Evelyn Mora. Up for discussion: What's wrong with the old system of international fashion weeks? How we might redesign the format to make it less polluting and more inclusive. Does everything have to go digital? How can we ensure no one gets left behind?

In May, the Ethical Fashion Initiative invited its community to bring its collective brain power to a hackathon. Why? To reimagine fashion’s business as usual. People from 60 countries, over 10 hours online, came up with creative solutions to four fashion challenges – the fashion week format, production & sales cycles, supply chains, and regulation.

A lot of people have been asking what went down so we’re starting our new podcast series with some episodes based on these themes, the first one being fashion weeks.

Our music is from the original production From Kabul to Bamako, music directed by Saïd Assadi. 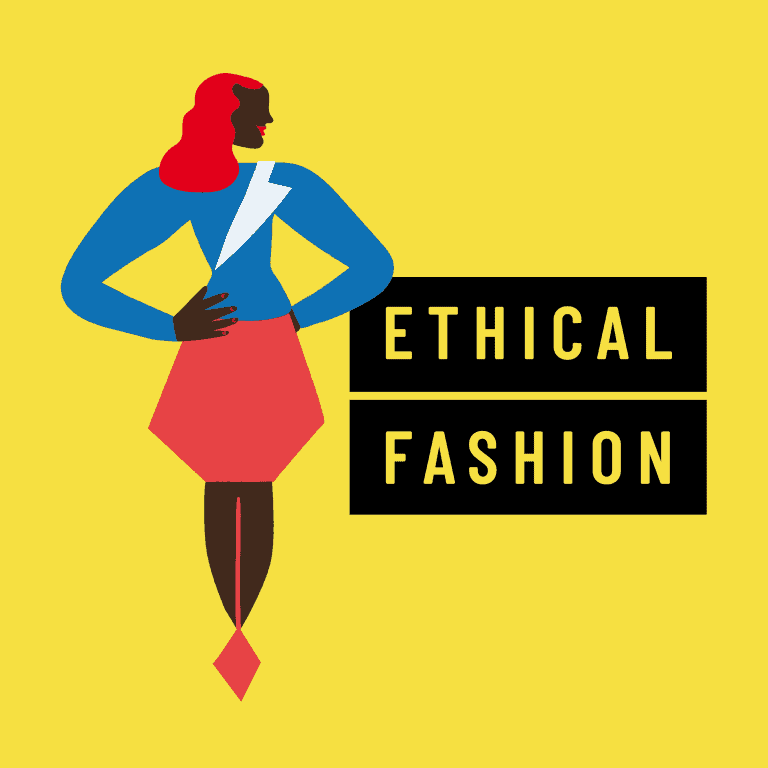 INTRODUCING THE ETHICAL FASHION PODCAST 🎧 How can fashion be a force for good? Goodbye fast fashion! Hello to a better way that focuses on social and environmental justice, inclusivity and sustainable development. Explore the issues driving the ethical fashion conversation with your hosts Simone Cipriani, Head and Founder of the ITC Ethical Fashion Initiative and sustainable fashion journalist Clare Press in the new Ethical Fashion Podcast. Episode 1 looks at the future of fashion weeks and will be released next week. For now, enjoy the teaser!